Our research links neuroscience to applied fields of sport, physical activity and training.

The goal is to develop specific and personalized training strategies for healthy young and elderly people, patients and athletes on the basis of a thorough understanding of the mechanisms of brain plasticity.

Projects in Research Focus 1 investigate the role of training for brain health and performance from a basic science perspective.

Our basic and applied science projects are supported by the Deutsche Forschungsgemeinschaft (DFG), Bundesinstitut für Sportwissenschaft (BISp) and the Otto-von-Guericke University (OvGU).

Longitudinal neuroimaging research in the past 20 years provided compelling evidence for training-induced changes in brain structure and function. Initial findings of localized grey and white matter changes (Draganski et al., 2004 Nature; Scholz et al., 2009 Nature Neuroscience) set the stage for a wave of human plasticity research that demonstrated brain changes within different settings and through diverse training stimuli. Such findings have great promise for healthy cognitive aging, diseases prevention, rehabilitation and human performance enhancement. In the past years, however, progress in the field has been dampened for both methodological and conceptual reasons.

We believe that further progress will emerge from a better understanding of the functional role and the neurobiological underpinnings of training-induced brain plasticity.

Along these lines, our projects seek to better understand the following main features:

In another recent study, we showed that exercise-induced increases in functional network connectivity of the dorsal prefrontal cortex mediate the benefit of exercise on sustained visual attention (Lehmann et al., 2020b). These studies demonstrate the transfer potential of training-induced brain plasticity and motivate a closer inspection of the behavioral triggers of brain plasticity and its modulation by age and pathology. We address this new perspective in close collaboration with colleagues from Universities of Lausanne (Prof. Bogdan Draganski) and Fribourg (Prof. Wolfgang Taube) as well as the Medical Faculty at OvGU Magdeburg (C01 of SFB 1436 Neural Resources of Cognition together with Dr. Gabriel Ziegler from the Institute for Cognitive Neurology and Dementia Research).

In another line of research, we try to establish a direct causal link between training-induced brain plasticity and improved cognitive and motor performance. For this purpose, we use non-invasive brain stimulation to perturb brain function in regions that are considered necessary for training-induced motor and cognitive transfer. Here we closely collaborate with Prof. Notger Müller from the German Center for Neurodegenerative Diseases (DZNE) in Magdeburg and Dr. Martin Keller from the University of Basel.

Description:
Improvements in performance result from physiological adaptations of the body. While peripheral adaptations (such as cardiovascular and musculoskeletal adaptations) meet the energetic demands of improved (or sustained) aerobic performance, central adaptations in the brain form the physical basis for an improved information processing and storage during various types of learning. Advancements in neuroimaging technology over the past 30 years have enabled researchers to track functional and structural brain adaptations in the living human brain in response to acute or prolonged periods of motor learning. A better understanding of these central brain adaptations, i.e. its temporal and spatial dynamics during learning, will lead to new intervention strategies in the context of healthy ageing or neurological rehabilitation – much like the understanding of peripheral adaptations has contributed to practical implementations of endurance and strength training methods.

Studies from our lab provided novel evidence for rapid, transient as well as performance-related structural brain changes over the course of motor balance learning (Taubert et al., 2010; Taubert et al., 2016). Learning a new balance task leads to rapid grey matter changes in motor representations of the primary motor cortex (Taubert et al., 2016). After two weeks of practice, grey matter expansions were found in supplementary motor, inferior parietal and dorsolateral prefrontal brain regions along with enhanced functional resting-state connectivity (Taubert et al., 2010, 2011). With further practice, however, these initial structural and functional changes renormalized and returned to baseline levels. This pattern was found although our volunteers further improved their balance performance during practice. We additionally found a steadily evolving and performance-related grey matter expansion across the whole learning period in parts of the frontopolar cortex which was paralleled by steadily-evolving microstructural changes in white matter underlying the frontopolar cortex (Taubert et al., 2010).

This non-linear time course of plasticity with rapid but transient structural brain changes was also found by other groups using other motor learning tasks (e.g. Wenger et al., 2016). The findings can be conceptualized in an expansion-renormalization model of brain plasticity (Wenger et al., 2017). This model offers a new perspective that views brain plasticity as a valuable but temporally limited neural resource for improved (transfer) performance.

In a new project in collaboration with Dr. Gabriel Ziegler from the Institute for Cognitive Neurology and Dementia Research in Magdeburg, we will investigate the temporal and spatial dynamics of training-induced plasticity in the elderly brain. Novel imaging techniques will allow us to quantify trajectories of plasticity in grey and white matter microstructure.

Description:
Magnetic resonance imaging (MRI) is a widely used tool to measure brain function and structure in living human subjects. Advantages of this technique include its non-invasive character and the possibility to measure volunteers repeatedly (i.e. across training). This makes MRI a valuable tool to study the brain and its changes over time at very high spatial resolution. However, most MRI studies in the field of training-induced brain plasticity have used MR sequences and analysis techniques that capture morphometric (shape and size) aspects of grey and white matter.

While these studies provided important insights into plastic changes of brain macrostructure, these approaches are of limited value for investigations of biologically-plausible plasticity mechanisms at the microstructural level. To overcome this issue, promising new quantitative MRI protocols have been developed over the past years. These protocols seem to have a higher biological specificity and quantify brain tissue properties that are linked to important histological markers such as myelin or iron. Together with colleagues from the University of Lausanne (Prof. Bogdan Draganski) we were able to show associations between theses brain tissue properties and participants’ age in a sample of approx. 1000 healthy elderly volunteers (Taubert et al., 2020). The results point to a pronounced age-related demyelination in white matter tracts of the prefrontal cortex as well as in grey matter regions of the primary motor cortex.

These patterns were accompanied by an enhanced iron deposition in subcortical regions with advanced years. Whether those age-related signatures contain behaviorally-relevant information or whether and how these maladaptive tissue properties are modifiable through training is presently unclear.

In order to prepare for future longitudinal training studies with this methodology, our lab currently evaluates the reproducibility of those new MRI sequences in collaboration with colleagues from the Medical Faculty in Magdeburg. We particularly focus on the reproducibility of multi-parametric maps and bio-physical modelling of multi-shell diffusion-weighted MRI. 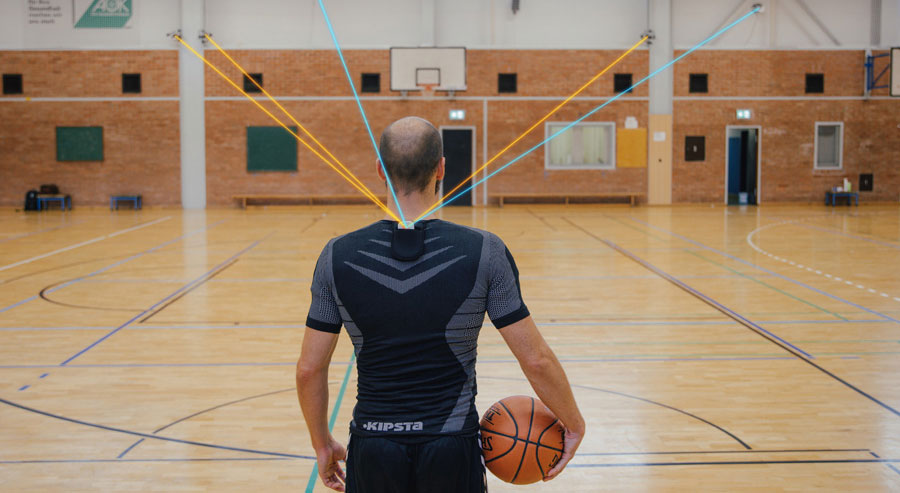 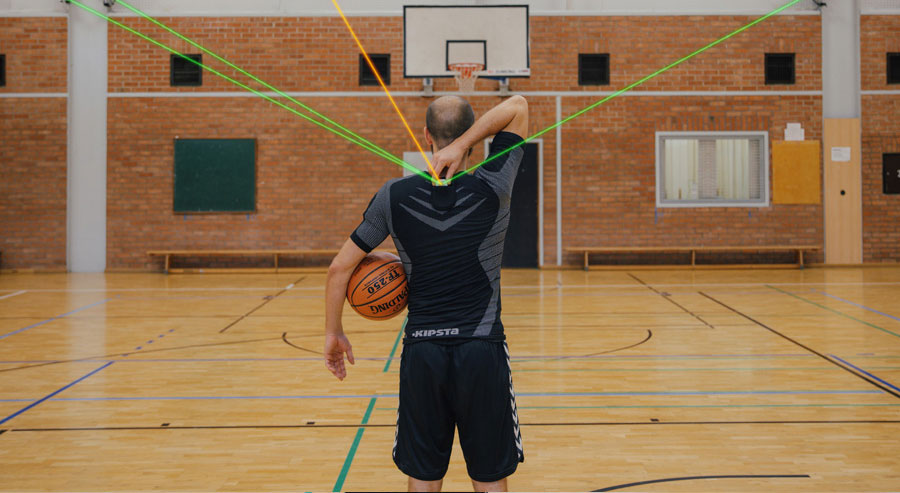 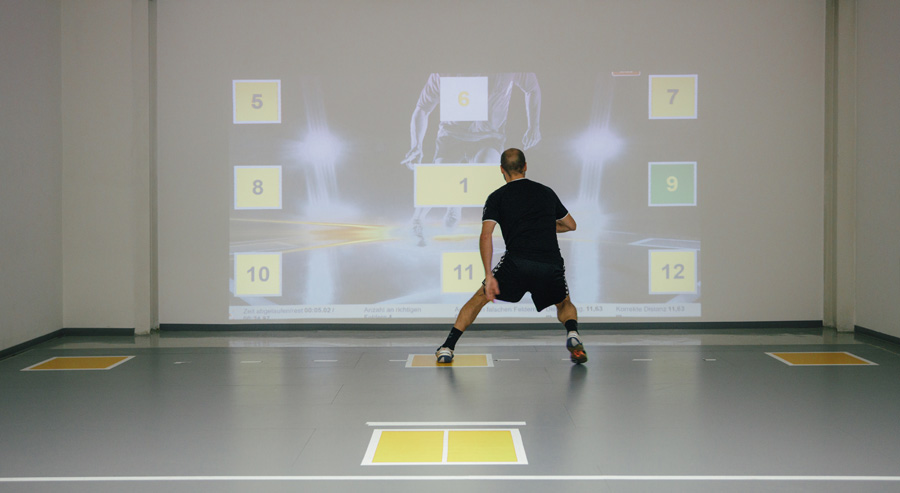 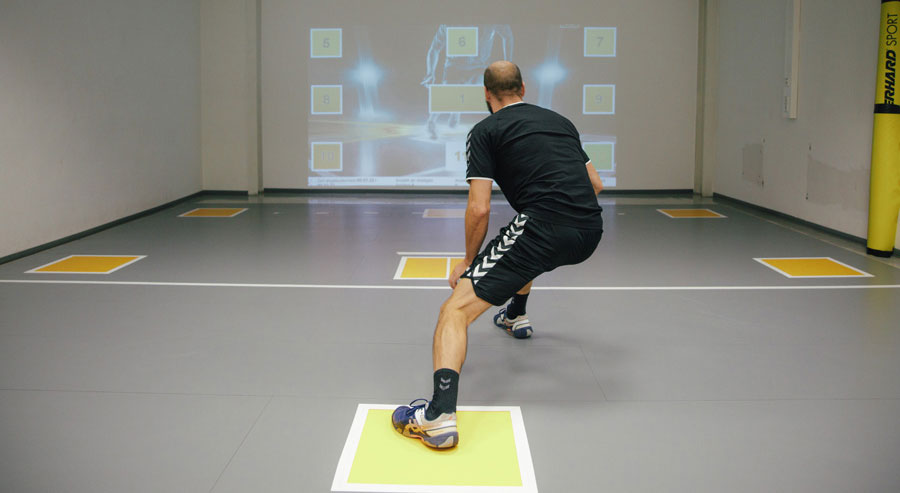 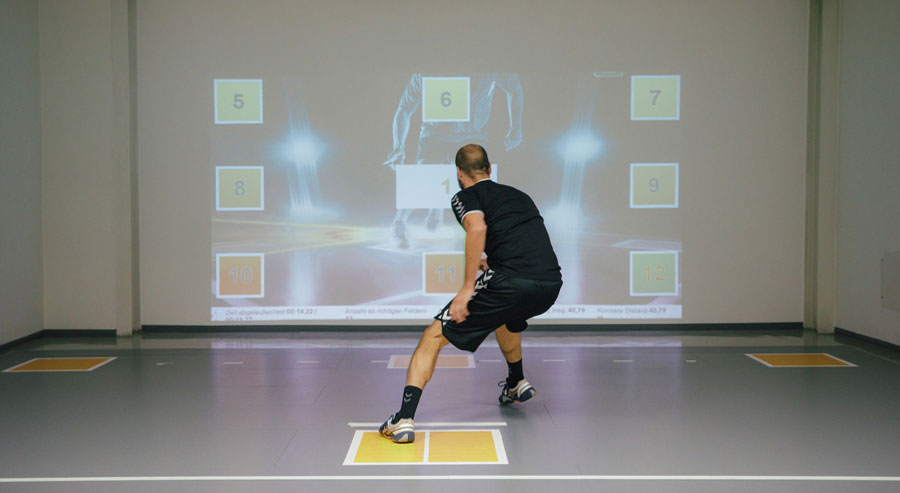 In real-world situations, human behavior is shaped by environmental and situational characteristics as well as individual dispositions of the performer.

An implicit but largely unproven assumption is that training of particular cognitive or motor functions under standardized conditions will benefit behavior under real-world conditions. Previous efforts from experimental scientists have revealed prominent improvements in trained tasks but a limited transfer to other tasks in response to lab-based training interventions. In contrast to this, training methods from sports scientists and/or practitioners from various athletic disciplines are explicitly developed to improve competitive performance under highly challenging conditions (competitive stress, decision-making in limited amount of time, coordinated collective performance, presence of opponents etc.). Thus, individual improvements in training may or may not unfold in real-world situations – be it in sports domains or in other aspects of everyday life.

Our research aims to better characterize individual behavior and individual performance improvements under more complex and challenging conditions than in a usual lab environment.

Much like our projects in Research Focus 1, we will investigate the transfer of training-induced performance improvements to other related tasks as well as performance under different environmental and situational conditions. In our research projects, we consider transfer along a continuum from proximal (conditions more similar to the trained scenario) to more distal (conditions with additional influencing factors) conditions.

Diagnostics and training of individual cognitive abilities in team sports

Description:
This project develops a test battery to assess an individuals’ ability to predict forthcoming actions of an opponent in team handball. Performance in team sports depends on a variety of individual and collective attributes.

The ability of players to predict the actions of their opponents is of critical relevance for success as it helps f. ex. to (re)act quicker and to appropriately defend opponents attack situations. Previous tests of predictive performance in team sports were largely based on visual stimulation coupled with simple response characteristics (button press in seating or standing position). In our project we evaluate (test reliability and validity) a battery of tests to assess predictive performance under more challenging response characteristics (e.g. specific defensive actions such as short sprints).

Test validity will be evaluated with an expert-novice paradigm in close collaboration with the local handball clubs (e.g. SC Magdeburg). The project is funded by the Bundesinstitut für Sportwissenschaft (BISp). Please see this video for more information.

Assessment of group performance for scientific purposes is so far largely based on subjective ratings or laborious and time-consuming video analyses. Real-time positional tracking systems offer advantages as they record each player’s field position with high temporal and spatial accuracy. Our goal is to infer the cognitive and motor capabilities of individuals and/or groups from positional tracking data under experimental conditions.